The Anna Plowden Trust's Trustees include members of Anna's family as well as specialists from the sector. 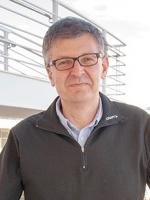 David Saunders is an Honorary Research Fellow at the British Museum, having been Keeper of Conservation and Scientific Research at the Museum for 10 years until 2015. After postdoctoral research in chemistry he began his conservation career in the Scientific Department at the National Gallery in London, where he worked for 20 years. In 2015–2016 he was a guest scholar at the Getty Conservation Institute in Los Angeles researching a book on museum lighting. His main research interests lie in the study and prevention of the deterioration of museum collections and in the use of non-invasive analytical techniques for the study of artefacts. He is a fellow of the Society of Antiquaries of London and of the International Institute of Conservation, whose journal – Studies in Conservation – he edited for many years. He serves on a number of conservation advisory boards and has been a syndic of the Fitzwilliam Museum since 2015. 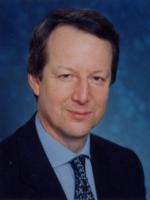 Francis Plowden is a chartered accountant, formerly with PricewaterhouseCoopers with world-wide responsibilities for public and not- for-profit sector work. He is or has been Chairman or Board member of a number of public, private or voluntary sector bodies, including the Greenwich Foundation for the Old Royal Naval College, West Dean College, the Royal Armouries and the Royal Ballet School. He also works as an independent adviser on public policy and management issues and his clients have included DCMS, the MLA, English Heritage and the British Museum. 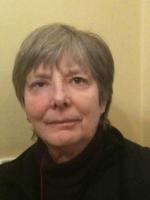 Penelope Plowden worked for the Economist Intelligence Unit for many years, at first specialising in Latin America where she lived for a time, and then taking responsibility for political and economic forecasts for countries around the world. She now works as a freelance editorial and economic consultant, specialising in developing  countries. She also sits on the committees of several local charities in south London where she lives.  Penelope manages the Anna Plowden Trust's grant making activities. 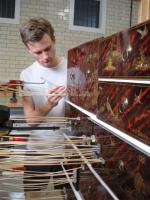 Tristram Bainbridge currently works as a furniture conservator for the Victoria and Albert Museum and in private practice. He is also the associate tutor in furniture conservation at West Dean College and has lectured in conservation at City and Guilds of London and Camberwell College of Arts. He received a training bursary from the Anna Plowden Trust in 2010 which allowed him to complete his Masters in Conservation at West Dean. Tristram and his wife Abigail Bainbridge run Bainbridge Conservation, a private practice specialising in the treatment of furniture, decorative objects, books and paper. Current research includes Asian lacquer and mechanical properties of adhesives in joint construction. 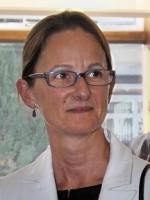 As Director of The Textile Conservation Centre from 1992 to 2009, Nell oversaw the relocation from Hampton Court Palace to the University of Southampton and the 10 years of success that followed.  Nell ensured the future of the Centre by helping to negotiate, and raise funds for, the new  Centre for Textile Conservation in Glasgow University.  Since 2009 Nell has been self-employed, her freelance work includes heritage, trust management and fundraising projects: she manages the National Manuscripts Conservation Trust and the Friends of the National Libraries. Nell is a Fellow of the Society of Antiquaries, Museums Association and International Institute of Conservation and is an Honorary Liveryman of The Clothworkers' Company; she was appointed MBE in 2003 for services to museums and textile conservation. 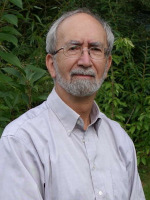 David has worked in conservation as practitioner, teacher and administrator.  His first appointments were at the Universities of Southampton and Cardiff, then at the Museums & Galleries Commission’s Conservation Unit, the Museums Training Institute, West Dean College - of which he was Principal -  the UK Institute for Conservation, and Icon, the Institute of Conservation.  Now retired, his main voluntary role was as Secretary-General of IIC, the International Institute for Conservation. He was a member of the National Trust’s Council and also its Arts Panel, and remains a specialist adviser to the Trust. He is a member of the British Standards Institution Committee on the Conservation of Tangible Cultural Heritage. Holding a BSc. in physics, he trained in archaeological conservation and has a PhD focussed on the technology and animal ornament of Anglo-Saxon jewellery.  He holds the Plowden Medal for his contribution to the advancement of the conservation profession. 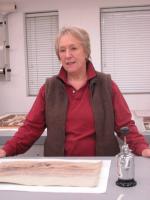 Jane is a conservator and restorer of art on paper. She has had her own private practice, now based in Suffolk, since 1970.  With others, she founded the Institute of Paper Conservation in 1976. In 1977 she was awarded a Churchill Fellowship to do further study in the USA.  Over the next two years she worked on the collection of HM the Queen in Windsor Castle, particularly on the Holbein drawings.  She is a Fellow of the International Institute for Conservation (IIC) and was a member of the Council.  She has worked on private collections internationally and for museums both large and small as well as dealers and advises the London auction houses. 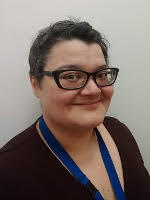 Christina read English and Philosophy at the University of Cambridge, and then trained as an objects conservator at UCL. She has worked at the Fitzwilliam Museum, the Polar Museum, the Whipple Museum and the Museum of Archaeology and Anthropology, all in Cambridge, as well as at the Faraday Museum in London. In 2006–8, she was the founding editor of IIC’s News in Conservation, and she has also been Editor of the Journal of the Institute of Conservation and Assistant Editor of Reviews in Conservation. Christina has a particular interest in communication and professional development issues relating to conservation. Since 2017, she has co-hosted the conservation podcast The C Word. She currently works in private practice, as a conservator and editor and trainer. 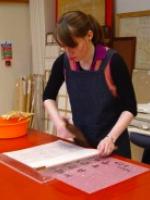 Carol Weiss is a paper conservator working at the British Museum's Hirayama Studio. She specialises in the conservation of Chinese paintings on paper and silk and other East Asian pictorial art. Carol is currently engaged in a traditional Chinese form of training, learning from renowned Master scroll mounter Mrs Qiu Jin Xian. Carol is a previous awardee of the Anna Plowden Trust, having received bursaries to undertake her Postgraduate Diploma and Master's degree in Conservation at Camberwell College of Arts, University of the Arts London. Carol also holds an MA Cantab. degree in English Literature from Cambridge University.