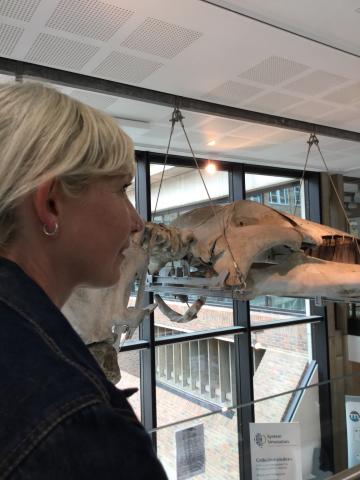 This two day conference hosted in the soon to be reopened Cambridge University Museum of Zoology, examined new ideas for storage, display, data-basing as well as the conservation of Natural History collections, with over a hundred delegates and both talks and poster displays the UK’s museums were well represented and it proved a great opportunity to hear and discuss current thinking and projects shaping the Natural Sciences.

Talks which stood out for myself included Jack Ashby from the Grant Museum, “Museums as experimental test beds”, which included information about the use of 3d printing methods in conservation practice, an example being their Quagga, one of only seven in existence and the only one on display, which had received a replacement 3d printed leg, time will tell how this ages, but he argues that being experimental means being able to fail, since that is part of experimentation.

The American Museum of Natural History have been carrying out extensive research into the re- dying of their taxidermy collections, I’ve been following this on their  project Blog “In their true Colors” they briefly talked about the project but didn’t present their final findings here, that will be presented at  the ICOM conference to be held in Copenhagen later in the year, but they did show and talk about methods and materials used while conserving the taxidermy specimens in the collection, including the remodelling of noses, adhesives used for the reattachment of fur and materials for replacement whiskers etc.

There were useful poster displays including Charlotte Rigby from the Horniman “Creating replacement fur using Japanese Tissue coloured with dry pigments”  which will come in extremely useful and others including air free environments.

Away from Conservation related talks, others included probably the most controversial talk or definitely the one which included the most debate, was that by Bolton Museums, the talk covered their recent display of Natural History specimens in the Library area of the shared building. Specimens were dressed as children’s storybook characters, including a wolf dressed up from the Little Red Riding hood story. Some people were horrified at the idea of dressing up taxidermy, and removing the nature of the specimen, but Bolton discovered that this was a hugely popular exhibition with the public who engaged with the specimens that they hadn’t really visited before.

Another talk which is extremely relevant was that given by Matt Lowe from Cambridge Zoology Museum ‘ Moving Experience’ about their current redevelopment, and the amount of objects which needed to be packed , the methods, training of volunteers and materials required. I think the most important phrase to take away from the talk and probably overall is to celebrate the successes as there will be plenty of stressful times during the whole redevelopment!

Store tours and tours of the new gallery spaces currently being built and installed rounded up a fun and informative conference.