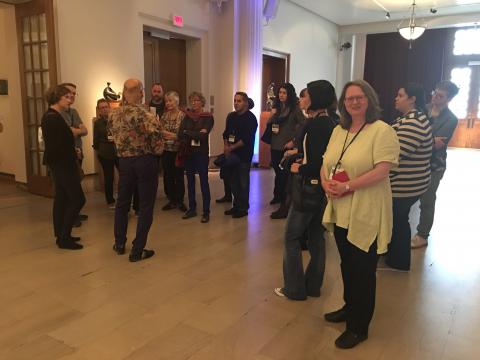 In the days preceding the conference there were associated workshops and tours. Issues around presenting and preparedness for contemporary art were described by the Head of Conservation during a tour of the Musée des beaux-arts de Montreal. There was a showing of Zeffirelli's moving and beautiful film Florence: Days of Destruction, setting the scene and the conference ended with an award ceremony which included awards for a number of conservators, Mud Angels, who had assisted, in their youth, during the rescue of collections during the 1966 floods.

Before attending I had the following aims:

The latter was at the invitation of Lori Foley, FEMA, and a first for me. I hoped it would help me develop confidence in taking part in panel sessions and feed directly into the service I provide.

The benefits were many. The day-long workshop,Building Emergency Response & Salvage Decision Making Skills, held on May 14, was largely lecture based but the scenario discussion exercise, in a new format, was particularly useful, as was the approach described for Psychological Care and staff well being after an incident. Additional cards, obtained from the presenter, were passed on to colleagues at the conference who had not attended this session, later tweeted, and will be adapted and distributed further. The approach taken to both staff welfare and the scenario exercise will inform the training I deliver, e.g., quarterly through the joint National Trust, English Heritage and Historic England Emergency Salvage Course. The presentation by Kara van Malssen on how to deal with Electronic Media was fascinating and again particularly useful. I forwarded the weblink to the related video to book and paper conservation interns I have worked with over several years, as an Intern/Trainee Adviser. Knowledge gained will again inform training delivered on the quarterly NT/EH/HE Emergency Salvage course, attended to date by c.750 people from the heritage sector, and others for whom I provide training and guidance. Shortly after the conference, inspired by a number of talks, I finally set up a Twitter account, an unanticipated benefit of attending, and tweeted the weblink and other highlights.

Meeting with attendees from so many countries helped to expand further international contacts and informal networks. While there were questions and comments following the panel session on Networks, where I was one of five contributors, there was little time for in depth discussion, however the experience helped me gain confidence in delivering in this particular forum, and I would be happy to do so again. The emphasis on the desirability of working with Emergency Planning Officers, although often difficult to achieve, was timely as the UK considers the implementation of the Sendai Framework for Disaster Risk Reduction 2015-2030, where reference to cultural heritage is made in three of the priorities, including preparedness and training, presenting an opportunity for the cultural heritage sector, including conservation. The joint presentation on the NT, EH, Historic England course with co-presenters Claire Fry and Christine Murray, and Bethan Stanley, as a co-author was well received.

Accepting the invitation to attend the Smithsonian Institution lunchtime meeting during the conference, about the proposed Smithsonian Cultural Rescue Center (SCRC) was an opportunity to hear about proposals for the international work of the centre and to contribute to the discussions about priorities. Sessions on the final afternoon of the conference brought into sharp focus the enormous scale of disasters such as the earthquake in Nepal and the destruction seen in certain Middle Eastern countries, during conflict, highlighting the need for adequate and appropriate levels of training for conservators before going into particularly hazardous or complex situations.

The conference was very useful and I am very grateful for the Anna Plowden Trust's CPD grant towards the cost of attending. 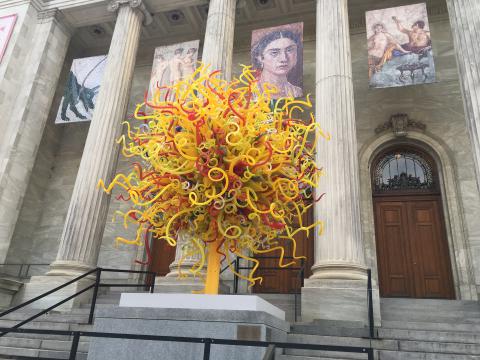