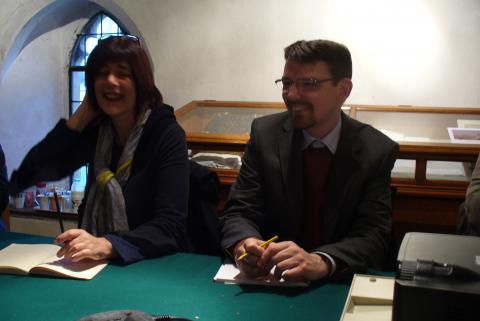 The award of a grant towards the costs of attending the Ligatus Summer school course allowed me to fulfil a long-standing ambition to study with Professor Nicholas Pickwoad, the preeminent scholar of bookbinding in the hand-press period.  My interest in the history of making books was one of the main reasons I trained in book conservation, and my career since has allowed me privileged access to a wide range of examples, both on my bench and in the libraries of Cambridge in particular.  I have been following my own course of study and investigation of binding structures from the 12th to 20th centuries for the last decade, but the field is large and I was only too well aware of the need to set my work in the larger context.  The Ligatus course, covering bookinding in the major European centres from the first appearance of printing to the end of the hand-press period, promised to extend my knowledge of the craft beyond England and place my own observations in the broader historical context.  It exceeded both these hopes over five days of intensive lectures, observation sessions and discussion.

Professor Pickwoad drew on his many decades of detailed study of the materials and construction of European bookbindings, not to mention his vast collection of slides, to take his students through the process of making a codex book, starting with the treatment of the newly printed sheets.  Each process was discussed in terms of the materials and craft skill used, the aim of the binder and the resulting mechanical effect.  At each stage we were encouraged to observe at an almost forensic level of detail, with the aim of being able to understand the constructional techniques and sequence, and to distinguish the nuances of practice which give hints as to the region, or even the workshop, of origin of the binding.  Every morning was devoted to three hours of illustrated lectures followed by an afternoon examining real examples at Norwich Cathedral Library, Blickling Hall, Holkham Hall and Felbrigg Hall in Norfolk respectively.  During these sessions we were able to observe a wide range of books, from folded gatherings of printed sheets still in their original wrapping paper as they had arrived from the seller in the eighteenth century, to the single known surviving example of a silk velvet binding made for the great bibliophile, Jean Grolier.

Such thorough immersion, combining intensely detailed study with a clear intellectual and historical framework, allowed me to put my own work in context and to develop my ideas about the cataloguing of bookbindings in my place of work.  In common with the great majority of other libraries, bindings are generally mentioned in catalogue descriptions only if they are particularly decorative, and much important evidence of provenance and use is therefore invisible to readers.  My experience on this course will help me to contribute far more helpfully to future plans for cataloguing in the collections I look after, as well as to create more concise but detailed conservation records.  I have already been able to use my knowledge to help readers and colleagues with enquiries concerning binding structures, and was particularly pleased to be able to see some distinctive but highly unusual eighteenth-century bindings which tie in with what appears to be the only known signed binding by that workshop which I came across 18 months ago and have been trying to place ever since!  I hope to be able to publish an article on this discovery in an appropriate journal within the next year.

I am extremely grateful to the Anna Plowden Trust and the Clothworker’s Foundation for their financial assistance to attend such an important course at a point in my career where I can put the knowledge I have gained to best use.