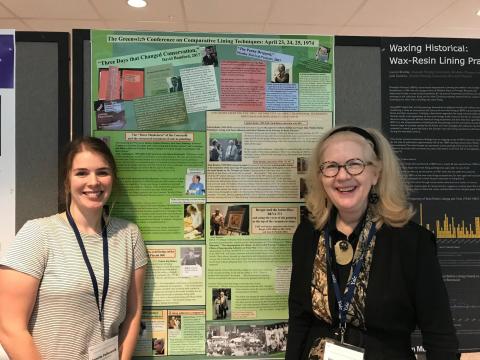 The ‘Conserving Canvas’ Symposium, supported by the Getty Foundation, took place on October 14-17 on the Yale University Campus in New Haven. The 43 talks given over four days were divided by subjects to put the focus on one matter, which then enabled a targeted discussion between speakers and delegates. Approximately 370 delegates attended: there had not been a conference solely on the structural conservation of canvas paintings since the 1974 ‘Comparative Lining Techniques’ Greenwich conference.

As a paintings conservator actively specialising in structural conservation, it was crucial for me to attend this conference. It enabled me to meet some of the established experts in the field, but also to discover a whole new generation of conservators and researchers. During this conference, the best talks were, in my opinion, given by the young conservators and scientists, who come to the field with fresh eyes and new ideas, and a motivation so strong they don’t count the hours spent working overtime! I was able to discuss the talks with them during the breaks, which are always perfect networking opportunities.

Having made contact with Alexandra Bridarolli, one of the French researchers working on nanocellulose and its use to reinforce canvas paintings, I hope to get some of her product to test it on paintings and assess its suitability. I also plan on testing some of the new adhesives combinations that were recommended for tear mending by German conservators Hannah Flock and Petra Demuth; and maybe making some homemade adhesive meshes using sturgeon glue or methylcellulose to use as reinforcement on delaminating linings, introduced by German conservator Mona Konietzny!

I also enjoyed the conference’s sandbox sessions. I was able to attend ‘The Use of the Willard Multipurpose table’, which was convenient as I use this table myself for various treatments. I was thrilled to hear Ian McClure share his tricks and tips. It also enabled me to report back to Paul Willard later on and share what had been discussed, including the potential need for improvements.

On my way back home, I spent a day in New York and visited two conservation studios with a colleague. The first was at the Institute of Fine Arts, which houses the conservation department of New York University. Received by Shan Kuang (Assistant Conservator), we were able to see paintings from the Kress Collection at various stages of treatment and ask questions about the training and their use of natural/synthetic varnishes. We then headed to the Metropolitan Museum of Art’s conservation studio. Received by Kari Rayner (Conservation Fellow) and José Lazarte Luna (Assistant Conservator), we were shown around the studio, discussing the various paintings currently being treated.

I volunteered to co-write a review of the conference for The Picture Restorer Magazine, which will come out in 2020. I will also give a run through to the Courtauld conservation students, share the new techniques and recipes I have learned but also reflect on the different philosophies brought on by the incredibly diverse community that gathered over the past week in Yale.

There are few structural conservators in the UK: participating in such an even made me realise that there are many people in this boat, encountering the same problems yet reacting and responding in completely different manners. Not only have I enriched my toolbox, I have also learned more about material behaviours, which will influence the way I perform specific treatments, with moisture and heat for example. Last but not least, conservation philosophy and treatments are both very much influenced by culture: having been exposed to so many ‘legacies’ over the past week, I certainly feel more open-minded about the way people perform treatments outside of the UK.

Without the help of the Anna Plowden Trust's CPD grant, I would not have been able to attend this significant conference and learn so much.

Without the help of the Anna Plowden Trust's CPD grant, I would not have been able to attend this significant conference and learn so much.
Camille Polkownik